Javalin is well suited for programming courses and for demos/prototypes. This page explains why.

A lot of universities still use application servers such as Glassfish or Tomcat when teaching Java web development. Setting up and configuring these servers for each student requires a lot of effort, and that effort could be spent teaching students about HTTP and programming instead.

Javalin runs on an embedded Jetty server, and you only need to add the dependency and write a single line of code to create and start a server. A full “Hello World” app looks like this:

This app can be packaged and launched with java -jar hello-world.jar, no further configuration required. This lets you focus your classes on core principles rather than specifics for setting up an application server.

Javalin is just a couple of thousands lines of code running on top of Jetty. There is very little magic, making it’s easy to fully understand the control-flow of your program.

Javalin doesn’t care how you build your app, so any knowledge obtained while working with a Javalin project should transfer easily to other (non Javalin) projects.

Javalin’s API is built with discoverability in mind. The server configuration object has a fluent/chainable API, and the context object has everything needed for handling a HTTP-request.

This lets new users discover the API with their IDE: 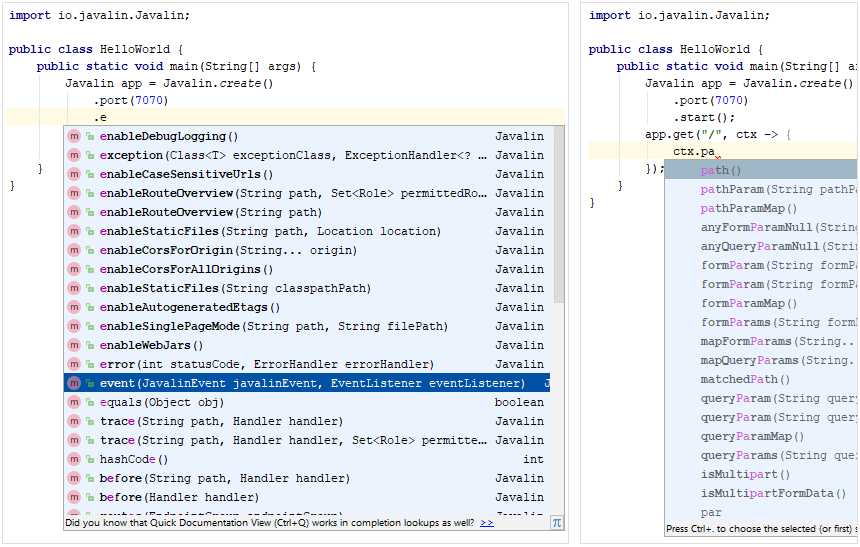 Javalin’s documentation is example-based rather than technical, which allows new users to copy snippets and experiment with them. Javalin also has tutorials for most common tasks that developers have to solve when starting web-programming.

A new (backwards compatible) version of Javalin has been released every month since the first version. Pull requests and issues are reviewed swiftly, normally every week.